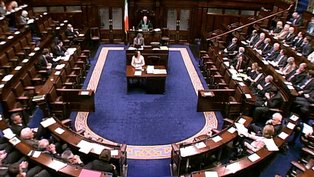 Deputy Eoghan Murphy:     Jonathan Spollen is 28 years old, six feet tall and from Ireland. He was last seen on 3 February 2012 in Rishikesh in the region of Uttarakhand in northern India. Mr. Spollen works as a writer and editor for the International Herald Tribune in Hong Kong. His father, David Green, and some family and friends visited the Rishikesh area to search for Jonathan, while his mother, Lynda Spollen, is co-ordinating all efforts here.

The picture that has emerged is that Jonathan was mostly travelling in the Rishikesh area in January 2012, near the German bakery area. He was on a trek from 14 to 28 January. His trip to India was recreational and he had previously been travelling with a friend. He came back from this trek with a tummy bug and a slight limp after a tumble near a waterfall.

Jonathan’s Indian visa would have expired on 21 February 2012, which is relevant, given that as a journalist working abroad he would have been conscious of ensuring that his visa situation would not be prejudiced by passing the expiry date. His last telephone call home was in the early morning, Indian time, of 3 February 2012. He had at that time been planning to go to Delhi but had changed his mind and seemed to be intent on going on another trek in the Rishikesh region. Communications with his family had been good up to that point. He indicated he would be gone for two to three weeks, but he did say that he would be in touch with his mother in two weeks’ time. Jonathan has not contacted his family since then and in late February, his mother and father raised the alarm with local authorities, the Irish Embassy in India and with family and friends.

Around 11 March 2012, some of Jonathan’s belongings were found by a small waterfall halfway up the road to Phool Chatti, nearby Rishikesh. It looks like he was camping there. This has meant that the authorities have given more priority to the search. However, any further diplomatic efforts will no doubt ensure that maximum resources and skill are devoted to this effort. Among his belongings found were his backpack, containing travel documents, a book and the usual things one would expect such as shampoo, basic medicines for upset stomach, headache, and so on. On investigation at the location, the police also found his sleeping bag and some clothes.

On 12 March 2012, another confirmed sighting of Jonathan emerged since the conversation he had with his mother on 3 February. He was in Lakshman Jhula, Rishikesh, between 12 and 14 Feb 2012, where he spoke with a lady for some time as they were both reading the same book, Shantaram. They discussed the book and generally chatted but the conversation did not turn to anything that may be relevant to the search.

Numbers far beyond what the local police force could be expected to provide are required here. Volunteers are needed and fund-raising efforts are being co-ordinated from Ireland. The Minister of State may have seen posters for table quizzes and other events happening in and around Dublin, as well as much activity online. Anything the Minister of State and the Government can do at the highest level would be incredibly helpful here. As time goes by, these things always become more difficult for everybody involved. If we can help in some way to keep up the sustained effort until we can find Jonathan and bring some news for his family, that would be incredibly important. His family needs our help in this matter urgently.

Minister of State at the Department of Foreign Affairs and Trade Deputy Joe Costello:     I thank the Deputy for raising this important issue. My Department has been providing consular assistance to the family of the missing person since being notified of the matter on 27 February this year. The Irish Embassy in New Delhi alerted the relevant authorities immediately on becoming aware of the matter and asked that full assistance be given to the person’s family in tracing the person. The embassy also confirmed details of the person’s Indian visa and checked with the Indian authorities as to whether an extension had been granted.

The person last made contact with relatives on 3 February 2012 from the town of Rishikesh in the state of Uttarakhand in northern India. The terrain of Uttarakhand is generally mountainous, comprising Himalayan ranges and their foothills. Much of the lower mountains and foothills, including the Rishikesh area, are densely forested. The capital of Uttarakhand is the city of Dehradun. The embassy assisted the family with the process to release the person’s telephone records from Vodafone.

The town of Rishikesh is situated on the Ganges, which is sacred to Hindus, and has a population of around 75,000 people. It is often described as the gateway to the Himalayas. The town itself is at an altitude of approximately 350 m, so its climate is comparable to the plains of northern India. Winter prevails until mid-February, but temperatures generally remain in the 10° to 20° Celsius range. Steep hills and mountains surround the town and are accessible by paths. Temperatures drop considerably with the increase in altitude. The town is an important access point for a number of Hindu shrines higher up in the Himalayas that are spiritually significant to Hindus and as such, the town caters to large numbers of Indian pilgrims. However, the four most important shrines are situated at an altitude above 3,000 m and remain closed or inaccessible in February due to snow.

Rishikesh is also a centre for outdoor pursuits and attracts many visitors seeking to explore the natural beauty of the Himalayas. The town has many travel companies offering mountaineering, trekking, rafting, kayaking and so on, and it attracts many backpackers. Trekking options during February are limited due to climate conditions.

On 11 March, tourists found some of the person’s personal possessions in the Rishikesh area. A consular official from the embassy travelled to the region and met local and state authorities, including the state director general of police in Dehradun, Uttarakhand. In addition, the embassy made a formal approach to the Government of India, asking for a full search of the area in which the belongings were found. A search was subsequently carried out, but unfortunately the person concerned has not been located. The consular official also met the family and friends of the person, who had travelled from Ireland to assist in the search.

The embassy has also advised the family on various sources of local information, such as travellers’ fora, which have allowed the family to tap into the travellers’ network and get additional practical help. The ambassador of Ireland to India has met the person’s father and other family members and the embassy remains fully engaged with this case.

Deputy Eoghan Murphy:     I thank the Minister of State for his reply and I appreciate all the work that has been done to date by the Government. The family and friends have not given up the search, and neither should we. I urge the Minister of State again to make contact at the highest levels with the Indian authorities, at a national level and within the region, to see what further assistance the Government can provide and to see if we can renew efforts to find Jonathan Spollen. The media can also play a huge role in creating awareness and in helping the family and friends to raise money for the efforts that are under way. People can go on to the website, findspollen.com, to express support, to help and to make donations to the campaign. It would be very helpful to all the efforts that are under way if that could be reported as widely as possible.

Deputy Joe Costello:     We will certainly continue to do what we can. The embassy is well aware of the matter and is dealing with it, but I will bring to its attention the Deputy’s point that the relevant Indian authorities be contacted at national and local level and how the local media can maximise awareness through articles about what has happened and how the website can be used for donations and assistance. We will bring that to the attention of the embassy and we will try to ensure every effort is made.

You can phone, e-mail or text at any time:

A support and donations site to assist in the search efforts has been opened at http://www.findspollen.com/.

Posters can be downloaded from this site.